In keeping with tradition, the first night of the season will feature works by Bartók, showing contrasting faces of the composer from different periods in his life. Mature works of his youth are represented by Two Images (1910) and the undeservedly rarely heard symphonic cycle Four Pieces for Orchestra with its late-Romantic passion and French colours. Premièred in 1923, the Dance Suite contrasts the characteristic motifs of the music of the Danube peoples in what is Bartók’s personal creed. Composed in New York, he dedicated his last completed work, the Piano Concerto No. 3, to his wife. Dezső Ránki is one of few artists who can boast this twilight masterpiece to be their musical vernacular. 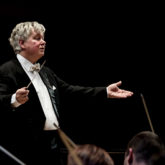 Béla Bartók’s Four Orchestral Pieces bear the opus number 12, which places it between Blue Beard op. 11 and the Wooden Prince op. 13. During the first phase of its composition (1912), Bartók did not complete the work: the orchestration remained in obscure sketch form only. During the 1910s, Bartók became disenchanted because of the reception accorded to his works, and temporarily lost interest in writing music (“I only compose as solitary person, for family use only”, he remarked bitterly.) He eventually recovered his enthusiasm, but only completed the full score of the Four Orchestral Piece in the summer of 1921, for his new publisher Universal of Vienna. The work was premiered by the Budapest Philharmonic Orchestra in the following year, conducted by Ernő Dohnányi.
We can suppose from some of Bartók’s quoted comments that the first two pieces of the Four Orchestral Pieces, the Preludio and Scherzo, form a closely linked pair within the entire cycle. This is supported by the observation that while the first shows similarities to the “In Bloom” movement of the Two Pictures (op. 10), the Scherzo evokes the “distorted” second portrait (from Two Portraits), op. 5, perhaps in an even more frightening form. The Third Movement, is marked Intermezzo. With its central section strongly contrasting with the relaxed Siciliano rhythm of the principal section, it seems to prefigure the “Interrupted Serenade” of the Concerto for Orchestra. Instead of a triumphant finale, the last of the Four Orchestral Pieces is a painful funeral march.