The Apotheosis of Dance

This concert offers waltzes and virtuosity. It starts out with the apotheosis of the waltz form: La Valse, which Maurice Ravel started formulating in his mind in 1906 (originally under the title Wien). Finally, in 1920, after the collapse of the Austro-Hungarian Empire, he completed it, as the dance of death of the formerly convivial Viennese world. The closing piece also features triple time. The opera Der Rosenkavalier is set in the time of the Empress Maria Theresa, but the Bavarian Richard Strauss paired it with an unabashedly anachronistic waltz, a genre that would only come into fashion more than half a century after the period when the story takes place. This is the basis of this concert piece created to music from the opera. Of the virtuoso violin pieces, Tzigane also relates somewhat to the former Dual Empire: this time to the Hungarian half. This is because Ravel was inspired to compose the work by a Hungarian violinist. Jelly Arányi travelled to Paris with Bartók in 1922. The two premièred Bartók’s Sonata for Violin and Piano No. 1 in a Parisian residence. Serving as the page-turner, Ravel was captivated by both the work and the violinist. He was therefore glad to write, at Arányi’s request, a rhapsody in the Hungarian style, whose accompanying piano part he later scored for orchestra as well. Before the interval, the audience will get to heart Maxim Vengerov perform Max Bruch’s 1866 Violin Concerto No. 1 in G minor. Maximum enjoyment is guaranteed. 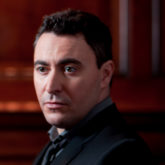 In this dance poem from 1919‒20, Ravel seized the opportunity to complete an unfinished project of his. Ever since 1906, he had been engaged with developing a waltz series titled Vienne, which would have evoked the atmosphere of the imperial Austro-Hungarian capital. By 1914, he had created an extensive outline for the future composition, but World War One made continued work on it impossible. Fortunately, however, Sergei Diaghilev commissioned a ballet from Ravel in 1919, and the composer was able to resume work on his earlier plan. The Russian ballet director, nevertheless, was disappointed with La Valse, failing to recognise the fleeting apparitions, the vision of an irreversibly vanishing era, the maddening passion of the waltz, the release of otherworldly emotions and the haunting vortex of final annihilation. Instead, Diaghilev construed it as a series of waltzes that, while cleverly assembled to fit with each other, were unsuitable for developing a story on the stage. Although the ballet première never took place, Ravel was vindicated by the success of the concert version, and the piece was even received favourably when it was performed in Vienna in December 1920.

On an imaginary map of the music of German Romanticism, Max Bruch (1838–1920) would be positioned somewhere close to the stylistic movement pioneered by Mendelssohn, Schumann and Brahms. Although he composed numerous works, including operas, oratorios, symphonies and chamber music, only a single composition of his – the Violin Concerto No. 1 – is really considered to be a repertoire piece in today’s concert world.

Composed in Koblenz, the Violin Concerto in G minor constitutes the third pinnacle of the German Romantic literature for violin alongside the works in the same genre by Brahms and Mendelssohn. The first version was completed in 1866 and premièred with the composer conducting. Bruch revisited the work the following year in collaboration with the violinist Joseph Joachim, who became the first to perform the new version in January 1868. Although the composer would later go on to compose two more violin concertos, the Violin Concerto No. 1 became so popular even during his lifetime that he sarcastically called for it to be banned in 1893.

Jelly Arányi is one of the best known representatives of the 20th century Hungarian school of violin playing exemplified by Jenő Hubay. It was not only Hubay’s teachings that she spread around the world, as she also served as a conduit for the intellectual legacy of her uncle, the renowned Hungarian violinist Joseph Joachim. Attesting to her talent, skill and receptiveness to new music is the fact that numerous contemporary composers wrote works specifically for her: Béla Bartók, for instance, dedicated both of his sonatas for violin and piano to her. After hearing Arányi play at a London concert in 1922, Maurice Ravel asked her to play virtuoso Gypsy tunes for him. This experience led him to compose his 1924 concert rhapsody Tzigane, which Arányi premièred that same year in collaboration with the pianist Henri Gil-Marchex. Ravel had originally scored the work for violin and an instrument called luthéal (invented by a Belgian instrument-maker in 1919, the luthéal is similar to a piano, but much more resonant and therefore evocative of the sound of the cimbalom), but after this experiment revised it for piano and eventually for a full orchestra.

For Richard Strauss (1864–1949) and Hugo von Hofmannsthal, the librettist for his 1911 opera Der Rosenkavalier, the golden age of the Austro-Hungarian Empire was synonymous with their youth. Just as different time periods can slip into each other in one’s memories of the past, so too do different eras, styles, fashions and fictional and actual people end up mixed up together in this opera, like an image in a kaleidoscope.

In 1945, decades of widely shared enthusiasm for his opera led Strauss to rework a few excerpts from it for a smaller number of instrumentalists, which he compiled as an independent orchestral suite.  The Rosenkavalier Suite provides a compelling cross-section of the music from the work, flowing as it did with the smoothness of “oil and melted butter”. The first movement consists of the entrance of Octavian, the knight of the rose, and his ensuing duet with Sophie, while the second is the waltz of Baron Ochs. The tenor aria from the first act makes up the third movement, with the fourth and fifth movements treating, respectively, the breakfast scene from the first act and the trio sung by the Marschallin, Octavian and Sophie. Finally, the sixth movement concludes the suite with the closing duet of Sophie and Octavian.