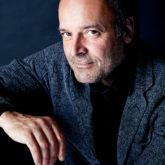 Brahms’s First Symphony in C minor soon attracted the epithet of “Beethoven’s Tenth.” Even as sobre a figure as conductor and pianist Hans von Bülow refered to it as such. And with good reason. In the second half of the 19th century, many felt that after Beethoven, nothing truly worthwhile had occured to the orchestral symphony as a genre. Schubert’s symphonies were written at the same time as Beethoven’s (not after), and when composers such as Mendelssohn and Schumann wrote symphonies (Schumann’s though, were not appreciated in his life time), they were exceptions rather than the perceived rule. Berlioz and Liszt were progressing towards program music – which some regarded as a betrayal of what “real music” is supposed to be. In 1876, a work was finally composed which was a fitting continuation of Beethoven’s legacy and critics who loathed program music finally had something to rejoice at. The final movement of Brahms’s First Symphony has a beautiful sweeping melody that reminded the premiere audience of Beethoven’s Ninth. Although Brahms did not utilise vocal soloist or a choir, he prepares at length for the hymnic melody, in the way that Beethoven did with the Ode to Joy half a century before.

There is no disputing Brahms’s debt to Beethoven in the first three movements, although this is less obvious. The slow Andante Sostenuto is more gentle and quieter than Beethoven’s slow music, while the third movement Allegretto Grazioso evokes the world of the old serenades, albeit from a nostalgic distance (nostalgia not being a word applicable to Beethoven). These movements were composed in a few months of feverish inspiration, shortly before the premiere. The first movement though, only attained its final form after a remarkably long period of fruition. Brahms began work on sketches in the 1850’s, and in 1862, produced a completed version which he played to Clara Schumann. Although she received it enthusiastically, Brahms later fundamentally rewrote it. The hugely impressive, energetic fortissimo introduction, with its tympany accompaniment, only found it way to the beginning of the sonata form movement in the mid 1870’s.