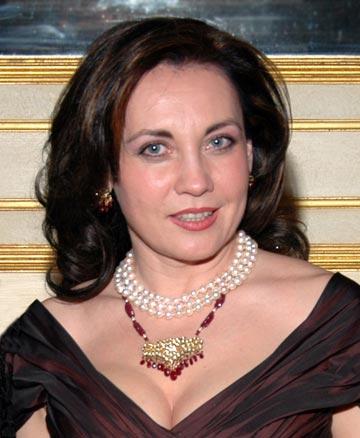 After finishing her studies at the Budapest Music Conservatory, in 1989 Andrea Rost made her opera debut as Juliette in Gounod's Romeo et Juliette.

Two years later, she became a solo artist at the Wiener Staatsoper, singing roles such as Zerlina, Rosina, Adina and Susanna. Next she added Donizetti's Lucia in Lucia di Lammermoor, and, in her very succesfull debut at La Scala 1994, Rigoletto's Gilda. She was reengaged there to sing Pamina and Violetta.

At the Salzburg Festival she participated in a new production of Strauss's Die Frau ohne Schatten (under Solti), L'Incoronazione di Poppea (under Harnoncourt) and La traviata (under Muti). Miss Rost was heard at the Paris Opera as Susanna, Lucia, Antonia (Les Contes d'Hoffmann), Gilda and at Covent Garden she debuted as Susanna and also sang Violetta, as well as the title role in the World Premiere of Donizetti's Elisabetta, an opera long considered lost.

In the USA, Andrea Rost sang Zerlina, Gilda, Violetta and Giulietta (I Capuleti e i Montecchi) in Chicago and in 1996 made her Metropolitan Opera debut as Adina in L,'Elisir d'amore, where she was also heard as Gilda and Lucia. She sang in the Washington Opera Antonia and in Los Angeles Pamina.