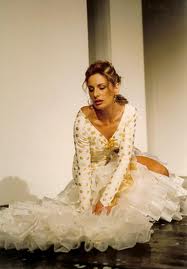 She started her singing studies in her native town Pápa, then continued in Győr and Budapest. She graduated from Liszt Ferenc Academy of Music in 2003 as a student of Éva Andor and Balázs Kovalik. She has participated in master classes of Anna Reynolds, Krisztina Laki, Júlia Hamari and Ralph Döring. Since 2001 she has been a member of Ars Classica Chamber Opera, where she has sung the roles of Donna Anna and the Countess Almaviva, among others. She appeared in the title role of Kamilló Lendvay's La putaine respecteuse, which was Kornél Mundruczó's first opera direction. Her first major role was that of Tatyana in Tchaikovsky's Eugene Onegin at the 2004 premiere directed by Balázs Kovalik at the Miskolc International Opera Festival. She debuted in the Opera House in the autumn of 2007 in the role of the Fifth Maid in Elektra, and some weeks later appeared in the role of Desdemona.