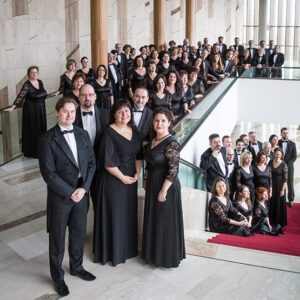 The Hungarian National Choir (originally called State Choir) was founded in 1985. Between 1990 and 2016 it was headed by Mátyás Antal, who was succeeded by Csaba Somos on 1 January 2016. The choir is one of Hungary’s leading professional choirs. It boasts a rich repertoire chiefly consisting of orchestra-accompanied and a capella choral music, as well as oratorios, ranging from works by the early-Baroque Schütz to Bach, Viennese Classical, 19th and 20th-century composers, and contemporary music. The Hungarian National Choir is open to every genre and is dedicated to performing rarely heard works. While the backbone of the repertoire consists of 19th-century oratorios, the Hungarian National Choir attaches great importance to performing contemporary music. Numerous world and national premières are linked with its name.

They are  returning guests at the Hungarian National Philharmonic Orchestra’s summer Beethoven series in Martonvásár. It regularly appears in the Orchestra’s family matinée concerts, as well as the Bartók New Series, launched in 2006. The successful performance of Richard Strauss’s operas and Schoenberg’s Moses and Aron has involved the National Choir and many of its soloists. In addition to concerts at home, the choir performs extensively abroad and regularly gives concerts in minority Hungarian areas across the border. The Hungarian National Choir is a regular participant of large-scale events at the Palace of Art, such as the Wagner Days.