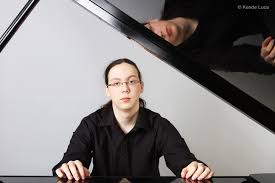 Krisztián Kocsis was born on September 10th 1997 in Budapest. As a child of his musician parents, the classical music has always played an important role in his life. Very early, at the age of 4 he composed and improvised already, listened to music all day and played the piano. This was the time when he got acquanted with the outstanding music and piano teacher, Erika Becht who is currently his teacher at the Pál Járdányi School of Music. For his general education he attends the St. Stephen Music High School in Budapest. In 2010 Krisztián Kocsis won the first prize at the Twelfth National Piano Competition in Nyíregyháza. In 2011 at the Third Béla Bartók National Piano Competition he became awarded with Special Prize. In the 2012-13 season he was a regular contributor to the series 'Six episodes Debussy's life" held at the Palace of Arts Festival Theater. In January 2013 he debuted with great success at the Béla Bartók National Concert Hall in Budapest, performing Mozart 's K.414 in A major Piano concerto with the Franz Liszt Chamber Orchestra. In May 2013, at the age of 15, he was awarded the Philomuses prize at the Ile de France International Piano Competition, Paris, France. At the beginning of 2014, he gave a concert in Szolnok, where he played Mozart's A Major (K. 488) Piano Concerto with considerable success. He receives many invitations to play recitals and perform with orchestras. His last major appearance took place in Paris in June 2014 where he gave a solo recital.